'Droja en el colacao' expression created by José Tojeiro, late Galician gentleman who was famous for his appearance on television reporting the event in which some "prestitutas" (prostitutes) stole his savings.

José became tremendously popular in Spain in 1993 after appearing in the program Código Uno, presented by Arturo Pérez Reverte in which he tells how some three young people began to go to his house where he lived only after the separation of his wife.

José suffered three robberies, in the second he began to suspect.

"Me echaron droja en el Colacao. Que yo note que dormía muchas horas y yo no dormía tantas horas" (They threw me drugs into the Colacao. That I noticed that he slept many hours and I did not sleep so many hours). Colacao is a cocoa-based drink very popular in Spain.

With "Droja" José means drugs, perhaps it was a confusion with the language since he had spent several years in Switzerland or simply a slip. 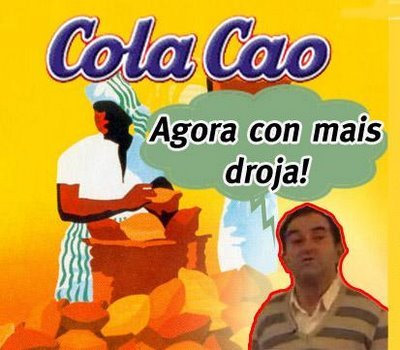